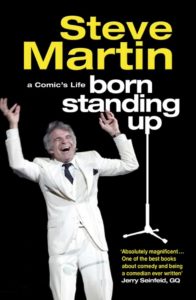 Feeling slightly uninspired and unsure of what to read next, I’ve been spending the last few days re-reading bits from books I delved into many years ago. I underline and earmark all of my books to death, so it’s easy to notice what I was particularly moved by. Steve Martin’s memoir, “Born Standing Up,” is truly tremendous. Here, Martin chronicles his early life and his rise to stardom with honesty and sharp wit, making the book an absolute joy to read. Heartbreaking and funny, this is a true inside look into not only the often lonely life of a comedian, but also a primer on what it’s like to operate as a creative.

While I do tend to re-write lines from books I’ve read, I had, in the fog of having babies and moving countries, forgotten so much of this book. I was especially moved his re-telling of painful childhood experiences, and the role they play in shaping our art:

“…My father muttered something to me, and I responded with a mumbled “What”. He shouted, “You heard me,” thundered up from his chair, pulled his belt out of its loops, and inflicted a beating that seemed never to end. I curled my arms around my body as he stood over me like a titan and delivered the blows. This was the only incident of its kind in our family. My father was never physically abusive toward my mother or sister and he was never again physically extreme with me. However, this beating and his worsening tendency to rages directed at my mother – which I heard in fright through the thin walls of our home – made me resolve, with icy determination, that only the most formal relationship would exist between my father and me, and for perhaps thirty years, neither he nor I did anything to repair the rift.

The rest of my childhood, we hardly spoke; there was little he said to me that was not critical, and there was little I said back that was not terse or mumbled. When I graduated from high school, he offered to buy me a tuxedo. I refused because I had learned from him to reject all aid and assistance; he detested extravagance and pleaded with us not to give him gifts. I felt, through a convoluted logic, that in my refusal, I was being a good son. I wish now that I had let him buy me a tuxedo, that I had let him be a dad. Having cut myself off from him, and by association the rest of the family, I was incurring psychological debts that would come due years later in the guise of romantic misconnections and a wrongheaded quest for solitude.

I have heard it said that a complicated childhood can lead to a life in the arts. I tell you this story of my father and me to let you know I am qualified to be a comedian.”