Happy March. This one is coming a little later than planned, but, at least, it arrives! In true keeping with the dilemma I was whining about in the last Marginalia — how difficult it is to take your time to consume things in a deeper way  — I’ve read, watched and listened to much less this month, and instead spent loads of time writing notes and thinking about the ideas that I’ve recently come across. Some of these ideas – the good ones, at least – are below.

I hope you enjoy them as much as I did. And, as always, please hit me back with your own recommendations.

1. I broke my seemingly unbreakable non-fiction streak of 2019 with a few very good novels. I must start with a gorgeous, understated and very wise book that has – and quite rightly — been taking the book world by storm: “The Friend” by Sigrid Nunez. The narrator, an unnamed novelist of great acerbic wit, poignancy and emotional insight has just lost a friend – a fellow writer – to suicide. What follows is a darkly comic, unflinching and poignant exploration of the status-obsessed literary world (“If reading really does increase empathy, as we are constantly being told that it does, it appears that writing also takes some away.”), love (“Once again I come upon his famous definition of love: two solitudes that protect and border and greet each other.”)
friendship, loss (“What we miss – what we lose and what we mourn – isn’t it this that makes us who, deep down, we truly are. To say nothing of what we wanted in life but never got to have.”), art and literature.

2. I continued with a book I’ve been desperate to read for a while after having seen it – and not recognised the author – as a 2018 Pulitzer Prize finalist: “Into The Distance” by Hernan Diaz. The only way I can describe this book – and I didn’t make this description up – is as a Western version of Melville’s “Moby Dick.” Håkan, the book’s central character, is a boy from Sweden who takes off for New York with his older brother, Linus. Almost immediately, he loses Linus in Portsmouth, England, and boards the wrong ship, ending up on the opposite side of the country: San Francisco. Broken, and resolved to find his brother, he begins a journey Eastward across the continent. The language is vigorously beautiful; as Håkan travels from enclave to enclave, Hernan Diaz turns you into the dislocated immigrant, with a loneliness and emptiness so evocative, so visceral that you cannot help but look into the same voids that Håkan faces himself.

3. I was so taken by Hernan Diaz’s evocation of loneliness that I moved Olivia Laing’s “The Lonely City” to the top of my pile. I read it in two feverish sittings at the reading room of the State Library of New South Wales, surrounded by books and other bookworms longing, perhaps, for a bit of shared loneliness. This gorgeous book, which merges memoir, philosophy and biography, lifts the lid on the universal struggle of being lonely in cities teeming with people. Laing, who arrives in New York in a deep state of loneliness, explores how several artists – most movingly Edward Hopper, Andy Warhol and David Wojnarowicz – can help her out of her own despair, while also embracing the possibility that loneliness could take her into “an otherwise unreachable experience of reality.” I thought this was quite a moving and enlightening book; Laing, through her own internal investigation, exposes the pain, but also the value, of loneliness:

“Loneliness is personal, and it is also political. Loneliness is collective; it is a city. As to how to inhabit it, there are no rules and nor is there any need to feel shame, only to remember that the pursuit of individual happiness does not trump or excuse our obligations to each another. We are in this together, this accumulation of scars, this world of objects, this physical and temporary heaven that so often takes on the countenance of hell. What matters is kindness; what matters is solidarity. What matters is staying alert, staying open, because if we know anything from what has gone before us, it is that the time for feeling will not last.”

4. I went down the Olivia Laing rabbit hole, of course (I still have her most recent novel, “Crudo,” on my shelf, waiting eagerly to be read). I loved her in this interview, where she speaks very eloquently – echoing “The Lonely City” —  about what our duties, as citizens, are in a time of crisis, and the role that art can play in leading us out of dark times.

5. I picked up a book at my local library that I’ve been wanting to read for some time: “How Democracies Die” by Steven Levitsky and Daniel Ziblatt. Here, two Harvard political scientists describe what leads to the scorched earth politics taking place in many democracies today. Their proposition is that the erosion of unwritten norms is the greatest threat to contemporary democracy, even in countries with strong constitutions (like the US, or the UK, where, even if unwritten, has still held power over the country’s politicians). The two norms Levitsky and Ziblatt believe are important, and are now under increased threat, are: mutual toleration and institutional forbearance. The first, mutual toleration, is the idea that, while the opposing party holds opinions you don’t like, they don’t represent an existential threat to your beliefs and ideals. It only takes a cursory glance at the American political and media landscape to see how little the two dominant political parties tolerate the other. The second norm, institutional forbearance, is using your discretion; not using your institutional prerogative whenever you get the chance, even if it’s legal to do so. To illustrate this, and to demarcate when American politicians abandoned their discretion, they recall the time Obama, when in his final year in office, nominated Merrick Garland to the Supreme Court. Republicans refused to even grant Garland a hearing, a move that, while legal, hadn’t been made in 150 years. In a democracy, then, there are ways  to stay within the letter of the law but still severely undermine it. This whole book was interesting and relevant, though what I was most struck by is the authors’ assertion that the mutual toleration that reigned in the United States after Reconstruction was based on the disenfranchisement of African Americans in the South. Republicans, in order to gain support from a wider range of the electorate, abandoned their commitment to equal rights, thus calming the Democrats and paving the way for a less polarised political landscape. So mutual toleration, but at what cost? Now, I wonder whether the Democrats – and other left-leaning parties all over the world —  will relinquish their commitments to the protection of immigrants in order to return towards a less vitriolic political environment. This is, obviously, a scary thought. The book ends with a question I’ve been thinking about quite a bit since 2016: is it possible to build a truly diverse anddemocratic society? I guess this is the great experiment.

6. I moved from democracy to capitalism with Yanis Varoufakis’s short primer on the basics of economics: “Talking to My Daughter About the Economy.” This short book – he wrote it in nine days! – is a very entertaining and accessible history of the birth of capitalism. Varoufakis starts with a question directed at his young daughter: why does inequality exist? He then goes on to provide her — and the reader — with the tools to be able to answer this question. Stripped down to its essence, though, this book holds one strong assertion: for democracy to thrive, every citizen needs to be able to speak in an authoritative manner about the economy. Everyone needs, in some way, to be an economist.

7. Enough of books now. I was mesmerised by — and am further in love with — Ruth Bader Ginsburg.  I adored RBG, the excellent documentary about her life and meteoric rise. What a legend. I’m thinking an RBG tattoo is in my future.

8. In severe anticipation of Season 2, I am re-watching Season 1 of Fleabag. What an extraordinary, funny, tragic and powerful show about our complete inability to truly see each other. I cannot wait to see how it continues.

9. My eldest son, like me, has taken to marking on the margins of his books. The five year old version of Marginalia. It might be my proudest moment as a parent: 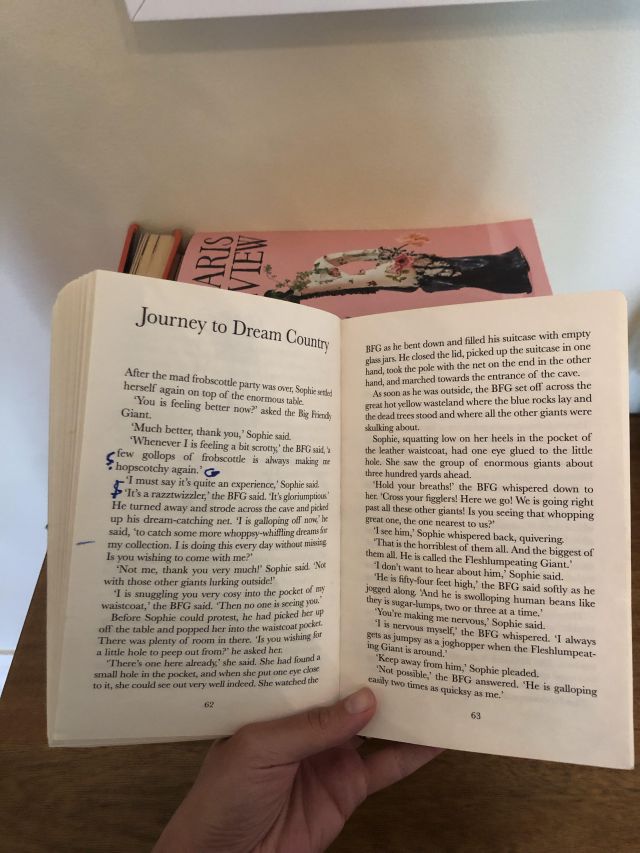 10. And here, as always, a random quote from my Commonplace Book. This is from the magnificent Lorrie Moore:

“A beginning, an end: there seems to be neither.”