I should start every one of these newsletters with an “I know it’s been a while” because, well, it seems it has always been a while. So, here it goes:

I know it’s been a while. There have been some major changes on my side of the (Australian) tracks. We moved to a new neighbourhood, which, with two small and very energetic boys, is only slightly easier than moving to a different country. No matter: I now have my dream rooftop and chimney views, and it seems we have found a tiny, London(ish) pocket in Sydney. Look! 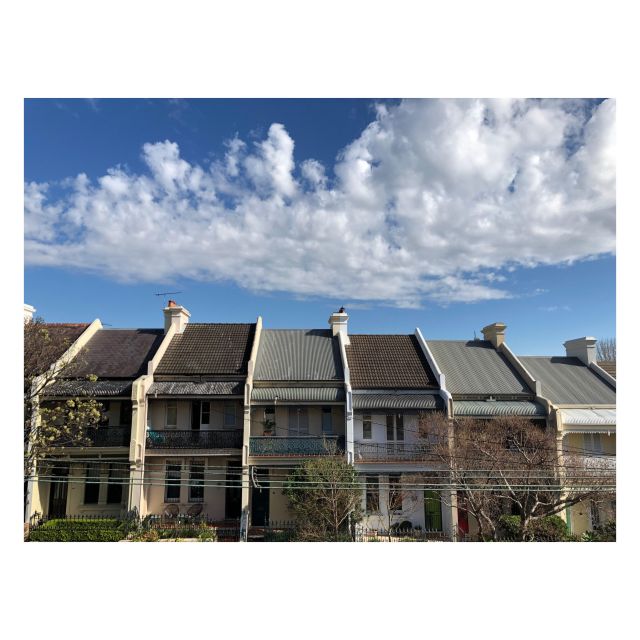 My children, like all children, are only getting more demanding as the days pass by. So by the time the evening claims the day, the only thing I feel like doing is passing out to the millionth read of Goodnight Moon.

Somehow, though, I’ve read, listened to and watched some pretty fantastic things — below is a selection of it all. I crushed on these pretty hard.

As always, if you have any recommendations, please send them my way!

1. At the very top of my mind is the extraordinary Michelle Obama, whose memoir, “Becoming,” I just devoured in two feverish reading stints (much to the neglect of my children. Sorry, children!). I enjoyed every bit of this book, though I was moved to tears by her descriptions of those crucial moments in life when you must overcome that universal challenge of “squaring who you are with where you come from and where you want to go.” Oh, and if you want more Obama: I loved this video of her and Ellen DeGeneres at Costco, and her two-part interview with Oprah is wonderful. #forever44.

2. Because I have a tendency to go down the odd rabbit hole, I dug deeper into the Obamas and binged on an excellent podcast from WBEZ Chicago, Making Obama. Over six episodes, the podcast takes you back to Obama’s early Chicago years, from his time as a community organiser to his three political campaigns. The podcast ends with his decision to run for President. Like Michelle Obama’s book, this series reveals a phenomenal, principled man who truly believed in his ability to do good. Again, #forever44.

3. And now deeper into the rabbit hole (it’s such a good rabbit hole!). Whilst in the midst of the aforementioned podcast, I recalled a fantastic essay Zadie Smith published very shortly after Barack Obama’s election in 2008, Speaking in Tongues. In this essay, Smith stunningly defends people who can comfortably operate “in the middle.” People, like former President Barack Obama, who, as a result of having had to navigate disparate worlds (his: a Kenyan father, a white Kansan mother, a childhood split between Hawaii and Indonesia) can “speak in tongues”:

“Obama can do young Jewish male, black old lady from the South Side, white woman from Kansas, Kenyan elders, white Harvard nerds, black Columbia nerds, activist women, churchmen, security guards, bank tellers, and even a British man called Mr. Wilkerson, who on a starry night on safari says credibly British things like: “I believe that’s the Milky Way.” This new president doesn’t just speak for his people. He can speak them.”

4. I stayed with Zadie for a little while longer, as I tend to do whenever existential dread strikes (often!). I went back and reread a few of my old favourites: Dead Man Laughing, a beautiful essay on death and her father’s love of comedy (“The funniest thing about dying is how much we, the living, ask of the dying; how we beg them to make it easy on us.”);  Northwest London Blues, a melancholy polemic against the closing of libraries across Britain; and Fences: A Brexit Diary, the most poignant and clear-eyed commentary on Brexit I have come across.

5. Ok, only one more rabbit hole to go: In “Becoming,” Michelle Obama writes very movingly about the shootings that plague her hometown of Chicago. I wanted to better understand the issue, so I listened to a two-part This American Life programme from 2012. Here, reporters spend an entire semester inside and around Harper High School, a school in the South Side Chicago neighbourhood of Englewood. In 2012, 29 current and recent students were shot. 29. The descriptions of how far children have to go to avoid the violence, and how it affects both them and the adults trying to protect them are almost unbearable to hear.

6. I may be late to this party, as I nearly always am when it comes to television, but I thought it worth mentioning, for my fellow Netflix slackers, that I am enormously enjoying The Good Place. It’s hilarious, smart and profoundly existential. I think it may be my favourite comedy since The Office (US). Oh, and: this piece in The New York Timeson how Michael Schur created the show is well worth a read. He geeked out on a ton of philosophical works and met with scholars and academics (and even hired a philosopher for the show!) to create a work that probes deeply into the moral and ethical questions we grapple with on a daily basis. And he makes it completely, hysterically funny.

7. I’ve been thinking about this a lot:

“Look, man, we’d probably most of us agree that these are dark times, and stupid ones, but do we need fiction that does nothing but dramatize how dark and stupid everything is? In dark times, the definition of good art would seem to be art that locates and applies CPR to those elements of what’s human and magical that still live and glow despite the times’ darkness. Really good fiction could have as dark a worldview as it wished, but it’d find a way both to depict this world and to illuminate the possibilities for being alive and human in it.”—David Foster Wallace

8. I miss London all the time; the place is always on my mind and in my heart. The former is spinning and the latter is hurting every time I read the news and see that dreaded word: Brexit. Loads of people both in Sydney (where I now live) and London ask me whether it’s easier to cope with bad news when you’re far away from home. It isn’t. As Zadie Smith wrote: no one could be more infuriated by events in Rome than the Italian kid serving your cappuccino on Broadway. I wasn’t able to put my finger on why it’s so difficult until recently – over three years since the Brexit vote: when you don’t have the benefit of everyday life in the place, all you have to go by is the news, and the news is, generally, always relaying the worst. Engaging with your home through the news is an imbalanced, painful way to connect with where you come from. So to fill my London-shaped hole, I read (and devoured) a book a very dear friend pressed into my hands during my last trip back home a couple of months ago: “Londoners” by Craig Taylor. It is a sublime, addictive, moving collection of testimonies on what it’s like to live in the most diverse city on earth – infuriating, invigorating, lonely, exciting, and, well, everything. My copy is so underlined it looks like an over-edited manuscript. This nearly broke me; I remember, still, the sense of wonder that comes over you every time you cross the Thames:

“Live your life in any way, London says. It encourages defiance. I loved what it gave me, who it allowed me to be. On the nights I could afford a minicab home, I rolled down the window while crossing the river and watched the lights on the water, knowing most late-night minicabbers were reaffirming their love of London with the same view. I loved its messiness, its attempts at order. I loved the anonymity it afforded.”

9. At the behest of a very bright friend, I picked up Deborah Levy’s mini-memoir, “Things I Don’t Want To Know.” This rich, gorgeous response to George Orwell’s “Why I Write” is the first instalment in Levy’s three-part “working autobiography.” The book moves between Mallorca (where she arrives to reflect on her life), South Africa (where she grew up) and England (where she emigrated to). Both within and in between, Levy gives us indispensable reflections on the writing life, all filled to the brim with deep psychological insight. I was breathless as I read its first line: “That spring when life was hard and I was at war with my lot and simply couldn’t see where there was to get to, I seemed to cry most on escalators at train stations.”

10. I’ve been terribly slack with my New Yorkers lately, but I managed to start and finish one piece recently, and it was a good one: the great Janet Malcom on photography and memory.